Dr. McCollum is a board-certified obstetrician and gynecologist and has been with the Shaw Center for Women’s Health since 2009. 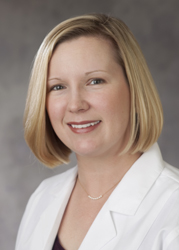 She grew up in Columbus, Georgia. Dr. McCollum attended The Georgia Institute of Technology and earned a bachelor of biology degree in molecular genetics in 1998, graduating with high honors.  She earned her medical degree in 2002 from Mercer University School of Medicine.  While there, she received the T.J. Lin Award for Excellency in Obstetrics and Gynecology.  Dr. McCollum completed residency at Medical Center of Central Georgia where she was Administrative Chief Resident.

Dr. McCollum is a member of American Medical Association, Medical Association of Georgia and is a Fellow with American College of Obstetrics and Gynecology. Her hobbies include hiking, traveling, and aerobic exercise, but mostly spending time with her husband, Eric, and two children.

T.J. Lin Award for Excellency in Obstetrics and Gynecology : 2002