Dr. Bruhn is a board-certified obstetrician and gynecologist who has been with Shaw Center for Women’s Health, PA since 1997. 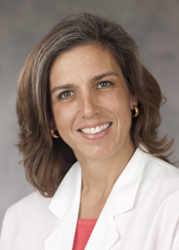 Dr. Bruhn is a native of Omaha, Nebraska.  She received her bachelor of science degree from Texas Christian University in Fort Worth, Texas.  Dr. Bruhn received her medical degree from the University of Texas Southwestern School of Medicine in Dallas, Texas in 1993.  While there, she was named Obstetrics and Gynecology Student of the Year.  She continued her training by completing an OB/GYN residency in 1997 with the University of Texas Southwestern Medical Center at Parkland Memorial Hospital in Dallas, Texas.  While there, she was named as Outstanding Intern of the Year and later served as Chief Resident.

Doctor of Medicine: 1993
University of Texas Southwestern School of Medicine

Certification: 1999
American Board of Obstetrics and Gynecology