Dr. Stubley is a board certified obstetrician and gynecologist who has been with Shaw Center for Women’s Health, PA since 1997. 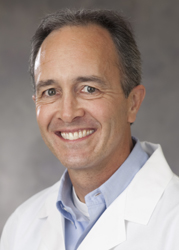 Dr. Stubley was raised in Greenville, South Carolina.  He received his bachelor of science degree in biology in 1984 from The Citadel, The Military College of South Carolina in Charleston.  He received his medical degree in 1988 from the University of South Carolina School of Medicine in Columbia.  Dr. Stubley completed a transitional residency in 1989 at Roanoke Memorial Hospital in Roanoke, Virginia.  He also completed an OB/GYN residency in 1995 at Keesler Medical Center, Keesler Air Force Base, Mississippi, where he received the Outstanding Resident Teaching Award for two consecutive years.

During his time off, Dr. Stubley enjoys fishing and spending time with his wife, Meg, three children, and 1 grandchild.

American College of Obstetricians and Gynecologists